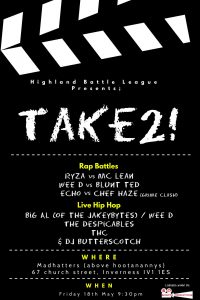 HBL is back for ‘Take2’. After the amazing success of the first rap battle event in the north of Scotland, the Highland Battle League are hoping to match said success with their second event. They have another first, the first ever grime clash in Scotland, Echo vs Chef Haze, grime clashing is a very popular form of battling in England, in which 2 rappers go head to head over a grime beat, which has never been done at an event in Scotland. They also have league owner and local rapper Ryza, who’s had amazing success in England, returning to his home city to take on MC Lean a fairly newcomer to the scene but by no means an easy opponent for Ryza, it’s looking to be an amazing battle. There will also be performers on the night the amazing local boys, ‘The Despicables’ the most unique of the performers as they create thier beats with pad machines and bass guitar on stage, we also had The Highland Collective with Echo, Ryza, Janski and Biscuits, again locals boys with years or performances under their belts. And headlining the event we have 2 Scottish legends, BiG Al from the Jakeybytes and Wee D performing a new project they have together. No excuse not to come to this if you are a fan of hip hop/grime… It’s free.