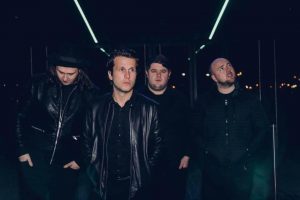 THE CALM FIASCO are a Glasgow 4 piece made up by Del Morin (lead vocals/guitar), Greg Totten (backing vocals/guitar), Harry Fleming (backing vocals/bass), Andy McInnes (drums) who formed late 2012 in dels loft.
The Calm Fiasco have an avid following in and around Glasgow which has seen them play a sold out ABC main hall supporting Vigo Thieves and sell out headline shows at the world famous King Tuts Wah Wah Hut twice in less than a year. The boys have recently caught the attention from Scotland’s National Newspaper The Daily Record with them stating the band have got a ‘huge future ahead of them’ and have ‘U2 stadium size hooks and whoohas that would sound perfect in Glasgow’s Hydro Arena’.
Despite being quite new to the scene, they are not afraid to go for the big sound and have been compared to The Killers, Interpol and The Strokes. With recent appearances at Tenement Trail, and King Tuts New Years Revolution, The Calm Fiasco are already heading for a massive summer after releasing their New EP which will be out later in the year.