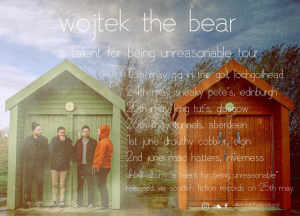 Following on from the success of their maiden EP, wojtek the bear tucked themselves away to work with in-demand producer Chris McCrory (Catholic Action) to record a talent for being unreasonable at Shady Lane Studios in late 2017. The album opens with the pointedly percussive oil & water; a delicate introductory track. Second track, the navies of landlocked nations, metaphorically depicts close-to-home struggles against a gentle indie-pop backdrop. After the traditionalist tendencies of postcode and the American Football-esque guitar/snare coupling of kindness doesn’t cost, the album crests at waves, a beautifully unassuming track. This kind of engaging simplicity is a skill normally found in bands far older then wojtek the bear, yet they deliver in spades.

The midriff of the album boasts the energetic injection of lead single made out of maps, before we are happily dragged back to the stripped-down call this a war; perhaps the record’s purest form of simplicity. effort contrasts a slacker-pop surface with a lyrical performance which questions the laid-back vibes the music presents. As the album draws to a close the title track continues the light influences from modern slacker-pop, before finale strong suit, which features label mate Annie Booth, returns the listener, almost full circle, to the delicate, thoughtful beginning of the album. 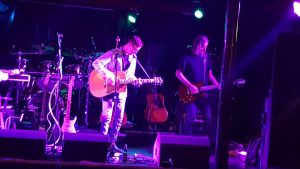 Liam Tedcastle is a Singer/Songwriter from Aberdeenshire Shakes. He is currently working with Ally Campbell, Ally has lots to bring with experience of live performances, recording and a big guitar sound. The songs have a mix of warmth from the Acoustic with an added bit of edge from the Electric Guitar, and heartfelt lyrics that mean something.