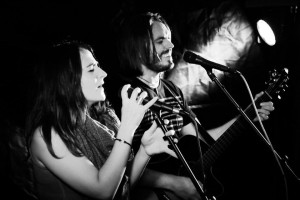 The Black Feathers are an award winning duo from Gloucestershire in England.

The perfectly paired voices of Sian Chandler and Ray Hughes intertwine effortlessly to create a genre-defying sound, combining elements of folk, roots, americana, and southern rock. The duo have been touring all over the UK for the past 2 years, winning over new fans of all ages everywhere they go.

They have performed at festivals all over the country, including the prestigious Cambridge Folk Festival, Stroud Folk Festival, and Maverick. They were awarded the 5 Valleys Folk Award in September of 2013, and the Folkstock Arts Foundation award for Best Live Performance in February the following year.

In May of 2014, they embarked on a 7 week tour in the US, including shows at Club Passim, Caffe Lena, the Red Clay Theatre, and a sell out show at the Bluebird Cafe in Nashville.

2014 also saw the release of Strangers We Meet, the duo’s debut 5 track EP, garnering national airplay on BBC Radio2, as well as regional play across the country and warm reviews from the music press, including The Telegraph, fRoots Magazine, and Acoustic Magazine.