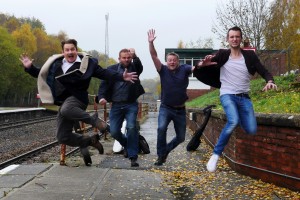 James Henderson (guitar) and Guy Bryson (drums) met as teenagers and immediately had a rapport, and have played together in various guises over the years. It wasn’t until 2010 when James invited Tom Cuddihy (bass) along for a jam that the idea for Novantae began to take shape.

Born of the bands eclectic musical influences, from traditional, to folk, through to heavy rock, combined with lyrical inspiration drawn from the people and places of Galloway and beyond. Novantae have created something original. Something powerfull.

Novantae have gone on to win ‘The Spirit of The Festival Award’ at the Big Burns Supper Festival and recently provided music for the award winning cabaret show ‘Le-Haggis’, now at the Edinburgh Festival.

In August 2015 the band independently released their debut album ‘For Us’. It was recorded in the heart of Galloway at Unit 7 studios next to Bladnoch distillery, and mastered in Glasgow at the renowned CaVa sounds studio.

Novantae have now bolstered their live sound with the addition of Robbie Huxtable, a classically trained violinist.

This band are hailed amongst the finest celtic/rock/folk Troubadours out there, so if you are catching them live, you are advised to bring your stomping boots!